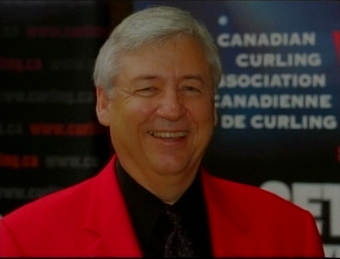 Jerry Shoemaker has been instrumental in ensuring other members of curling receive the regognition they deserve through his long standing involvement of the Legends Committee. It is because of Jerry and the Legends committees hardwork and dedication that the other five nominees to the CURLSASK Honour Roll are here tonight.

Jerry Shoemaker has been active in curling as a player and an administrator, reaching the highest level possible as an executive when he was elected for a one-year term as president of the Canadian Curling Association for 2005-2006 season.

He began curling as a 10-year-old in Plunkett and moved to Saskatoon where he was skipping in adult competitions by age 14. His involvement in curling spans over 45 years where he has contributed at all levels of the sport. Jerry has been nicknamed the “Likable Lefty” and “The Shoe”.

He began curling in 1971 and has been a member of the Granite, Nutana and CN clubs. Jerry was on a committee that was tasked to form an organization that would promote the sport of curling in Saskatoon. In 1990 the Saskatoon Curling Clubs joined together to form Curl Saskatoon.  Jerry Shoemaker was elected the first president of Curl Saskatoon in 1990-1991.

He was a Committee Chair on the Brier Patch Committee, the Director of Curling Club Relations, the CCA Competition Liaison and the vice President of Facilities for the last four Briers to come to Saskatoon (1989, 2000, 2004 and 2012).  He also served as a Canadian delegate to the World Curling Association and the 2006 Olympic Games and was of vital importance to bringing the 2017 Olympic Trials to Saskatoon.

On the International stage, Jerry was the 2003-2005 Canadian Delegate to the World Curling Association and in 2006 to the Olympics in Turino, Italy.

Jerry continues to be in involved in the sport of Curling. He volunteers as a Competition Liaison for Curl Sask, Chairs the Legends of Curling Honour Roll and is involved with Curl Saskatoon. Jerry is also on the Board of Directors of Sask Sport and the Provincial KidSport Committee.

Jerry has been married to his very supportive wife Elaine for ___ years and they have 2 children and 8 grandchildren. When he’s not busy volunteering his time, he enjoys spending time at the Moon Lake Golf and Country Club as a golfer and player assistant. 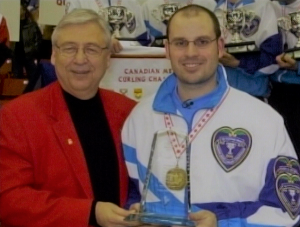