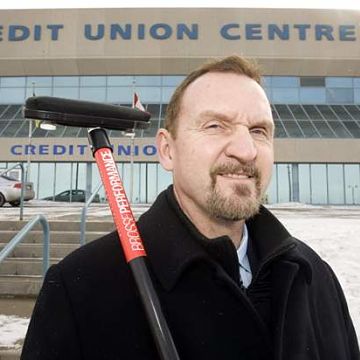 Kerry started curling at the age of 16, with his Dad, in a Saturday Commercial League at the Hub City Curling Club in Saskatoon. He loved watching and playing the sport so much that he built a rink in his back yard. He then bought plastic curling rocks from Eaton’s and started a league with his friends and neighbours.

His prowess competing in his backyard and at the Hub City Club paved the way for success in competitive curling. In 2000 he joined the Brian Humble team with Terry Hersikorn and Dean Kleiter. They competed at the Provincial championships eight times between 2000 and 2011. In 2003 they made it to the final, losing to Doug Harcourt. They also competed at the first ever Canada Cup that same year in Kamloops and finished at 2-2, just out of the playoffs.

He also won a Provincial Mixed championship with his wife Lori McGeary in 1999. The team finished 6-5 at the Canadian Championship in Victoria, BC with skip Greg Anholt and lead Heather Walsh.

And while he excelled as a competitor, his greatest contributions to the sport was as a builder. In 1997 when the internet was in its infancy, he recognized the potential it had to elevate the sport. He developed, owned and operated the Saskcurl website through 2014, spending countless thousands of hours updating the site with information, results and photos. In 2010 he once again used technology to further the sport. He introduced webcasting of the men’s and women’s Provincial championship. The broadcasts have increased in quality over the years and now include replays and highlights.

Kerry also served on the Board of Directors for Hub City Curling in the early 80’s and was club president in 1981. His experience made him a natural choice to be a key contributor when the sport’s biggest events came to Saskatoon.

In 1989 he served as the media director for the Labatt Brier. Eleven years later when the event returned he was the vice-president in charge of facilities.

The event became the Nokia Brier when it returned in 2004 and Kerry’s title also changed, serving as the Vice-President in charge of Finance. When the Brier returned in 2012 he was host committee chair of the Tim Horton’s Brier when the event was a finalist for event of the year in both the Saskatchewan Tourism Awards, and Canadian Prestige Awards.

He has continued to make time to compete in recent years and in 2015 made it to the Provincial final in the senior men’s championship, losing to Glenn Despins.

Away from the rink he has been a member of the Board of Directors of the Hilltops and has also introduced webcasting for their games.

Kerry has helped the next generation of curlers as well, assisting in workshops for school children in association with the ’04 Brier and a junior curling program at the Sutherland Club in 2009-2010. In 2013 he received the Ken Rowley Friends of the Game Award from Curl Saskatoon. 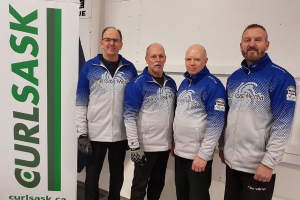